Let’s make a game. They said. It’ll be fun. They said. And boy were they right! As someone who appreciates playing the odd game here and there ( or you know, all the time ), I am well acquainted with what constitutes a good game and the thought of being able to design one got my creative juices flowing ( kind of gross ). Of course, the idea of designing a game and the reality of it turned out to be very different. Majority of my gaming career has been on a console ( yeah, yeah, yeah ), in one form or another and so the games I prefer to play are open world RPG’s, but even when I was first coming up with ideas that seemed a little ambitious. So instead I thought back to all those years ago when my friends and I would stumble onto game websites and play just for the hell of it. And one game stood out above all the rest. Fly Girl. A simple, surprisingly fun and hilariously cringe worthy online game that keeps you entertained for hours. The premise is as follows. You are Fly Girl, a women in a mans world. Dressed to the 9’s or at least 7’s, you are out on the town, hitting all the popular night clubs ready to get your drink on, the only problem is that the only drinks are being held by men and they’re not willing to share. But they will have a crack at you if you get to close. No problem, I’m sure they drop their drink if you jump on their heads. See where I’m going. 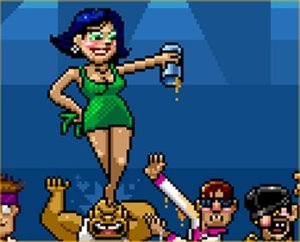 Fly Girl take a classic concept and puts a ( relatively ) modern spin on it. The concept is widely known, and therefore easily understandable and the goal ( collecting drinks ) is simple enough but the risk of being ‘grinded’ keeps things new and fresh, adding a challenging element, making the game 10 times more enjoyable. I wanted to incorporate this idea into my own game. To choose a concept that I already know has merit and adapt it to attract a new audience. So take a classic “stomp on the enemies,” add a University, some books, a couple of HD’s and voila. A game that can be played anywhere. anytime by anyone. Job well done. So how does one go about making a digital game? A few weeks ago I was introduced to the sortingh.at and after hours of playing ( pun intended ) around I stumbled across Stencyl; a program that allows users to create games without code. Like most programs it took some time, and several tutorials until I was ready to try my hand at actually creating but it was a nice change of pace dragging and dropping instead of typing. Although there are still elements of code for those who understand and wand to delve further into the design process, the idea of anyone being able to create a game with no required knowledge is one that should definitely be promoted.

In a time when people are constantly connected, own multiple devices and no longer have to go leave the comfort of their living rooms to be exposed to new things, video games have changed the way we play. Available to us at any where, any time, for any reason, video games have renegotiated the laws of virtual playing spaces. But does this mean that digital and physical play are fundamentally different? Keith Feinstein, President of the Video Game Conservatory embraces some classical conceptions of play (such as special exploration and identity formation), suggesting that video game play isn’t fundamentally different from backyard play. According to Sheila C. Murphy, to facilitate such immersive play, to achieve an appropriate level of ‘holding power’ that enables people to transcend their immediate environments, video game spaces require concreteness and vividness. The constant push for bigger and better within the video-game industry has been towards the development of more graphically complex, more visually engaging, more three-dimensionally rendered spaces, and towards quicker, more sophisticated, more flexible interactions with those spaces. Video games tempt the player to play longer, fully emerging themselves in the experience. To explore ancient cities, traverse the galaxy, fight in wars, accumulate outrageous sums of money, or solve crimes. Video games constitute virtual playing spaces which allow people to extend their reach, to explore, manipulate, and interact with a more diverse range of imaginary places than constitute the often drab, predictable, and overly-familiar spaces of their everyday lives.